Via The Cornell Worker Institute 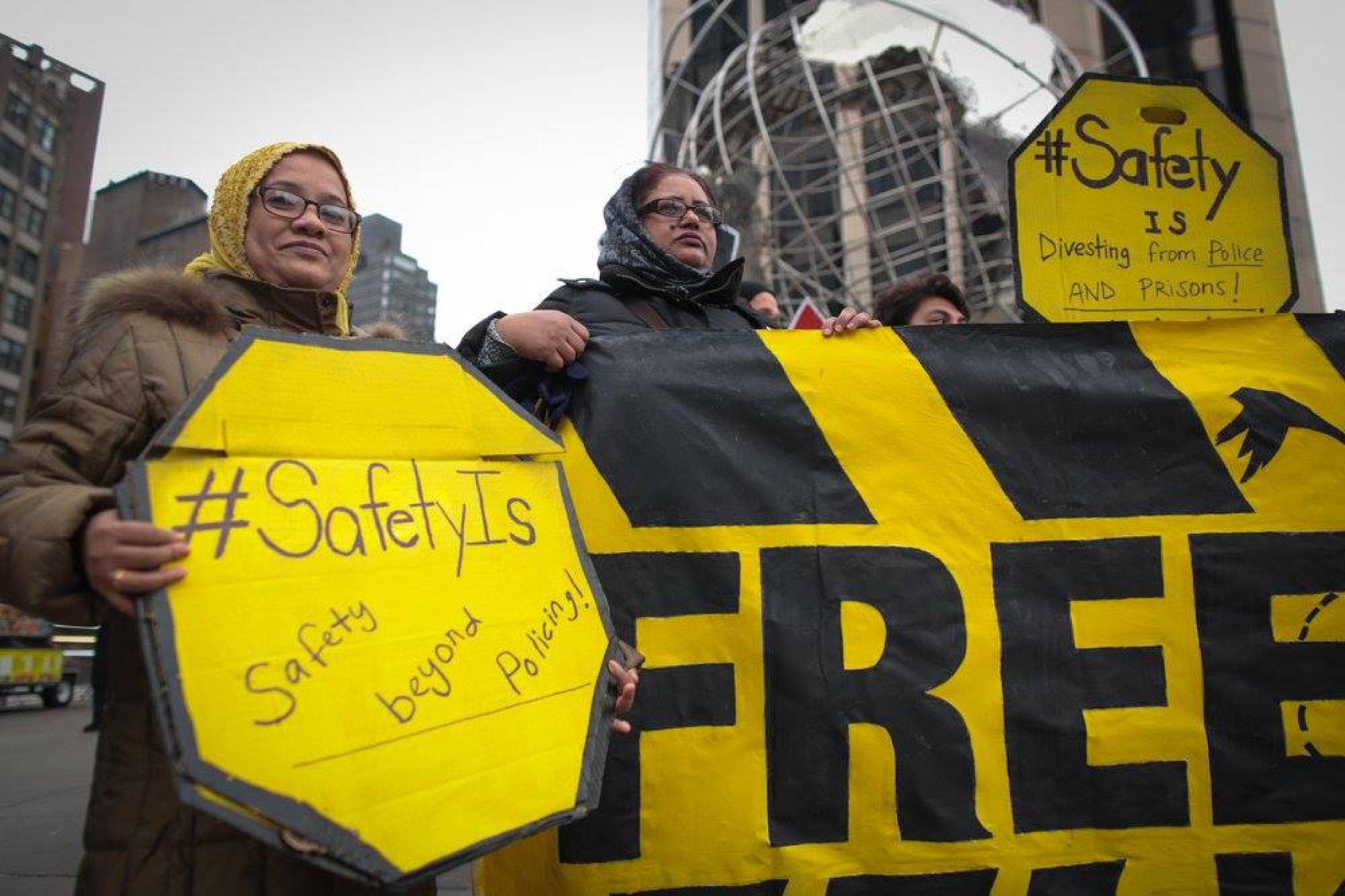 The result was frontline leaders creating #FreedomCities, which among its demands includes a just economy and safety beyond policing & incarceration. Through the Freedom Cities Movement, the WCF is leading the charge to redefine safety and to demand investment in people and the planet. Safety is ending police/ICE brutality and creating a just economy through reinvestment and reparations.

DRUM organizer Anshu Khadka, said at the Freedom Cities January launch “We want freedom for all of us: workers, all immigrants—documented or undocumented, people with criminal convictions, LGBTQ and GNC people, and all people of color. As we rise up and move forward, we know that none of us are free until all of us are free.”

The New York Worker Center Federation is a city-wide alliance of worker centers building power among diverse immigrant and worker communities. We are using various creative tactics to fight back against Trump, below are three examples led by WCF members NYTWA, DRUM, and ROC NY.
#NoBanNoWall
On Saturday January 28th, the New York Taxi Workers Alliance (NYTWA) went on strike to protest Trump’s Immigration Executive Orders. The Taxi Worker took JFK airport by storm, and hundreds of people came out in support. Yet the fight was one not just to fight back against Trump’s racist policy, but to fight for economic justice.
NYTWA has been in struggle against Uber, who attempted to thwart the strike and throw their support behind Trump. The result a call for solidarity by NYTWA asking supporters to delete their Uber app. Over 200,000 people followed suit and led to Uber’s CEO resignation from Trump business advisory council.
Javaid Tariq of the NYTWA said that the January strike advanced both the fight against Islamophobia and worker exploitation. The fight demonstrated clearly the corporate coup that was Trump’s election. The action stood both against the state and corporations, which for today is even harder to distinguish the difference.
The NYTWA is building on the momentum to advance human and worker rights. This month they are leading an action in front of the Governor’s Office to protest the Uber Bill and the new proposed $4 fee by the NY & NJ Port Authority.
#HateFreeZones
Desis Rising Up & Moving (DRUM) launched a Hate Free Zone in Jackson Heights, Queens in December 2016. Two months ago, another Hate Free Zone was launched in Kensington, Brooklyn. DRUM is leading this new movement to build neighborhood defense committees against the Trump administration’s policies of xenophobia, racism, and bigotry.
At the Brooklyn launch, DRUM member Sohel Mahmud said, “Undocumented workers are on the frontlines of the attacks on immigrant communities. We need local business owners, workers, customers, and community members to commit to building Hate Free Zones in our neighborhood. These hands of mine are a part of building this neighborhood. It’s time for everyone to join them and build more bridges, relationships, love, and solidarity for all frontline communities.”
As Taxi Workers led a strike at the JFK airport, DRUM worker leaders were bringing the fight to their neighborhoods. The Kensington Hate Free Zone is creating a line of community defense to fight Trump’s Islamophobic and anti-immigrant policies. The work has continued, this month DRUM hosted another Hate Free Zone training to provide tools for communities to organize community defense committees in their neighborhood. The interest in building community Hate Free Zones is beyond New York City, other organizations are reaching out to replicate this community defense model in their own neighborhoods.
#Table4Everyone
The fight against Trump is happening in the streets, in our neighborhood, and also at the workplace. Restaurant Opportunities Center United (ROC United) is leading a national movement to create sanctuary restaurants, over 300 business have already joined. The restaurant industry is the largest employer of immigrants. This effort aims to combat the hate and harassment that immigrant workers face while on the job.
The New York affiliate, ROC NY, is leading the fight locally and are working with restaurants to sign on and commit to create a safe space for everyone with a zero-tolerance policy for racism, sexism, or xenophobia. Taria Vines, a board member of ROC NY, at the launch of Sanctuary Restaurants explained that for workers in the restaurant industry, sexual harassment is a daily reality that needs to stop. The effort works to create a table for everyone and is also tackling the issue of the tiered minimum wage that restaurant workers receive, the resolution is for one fair wage.